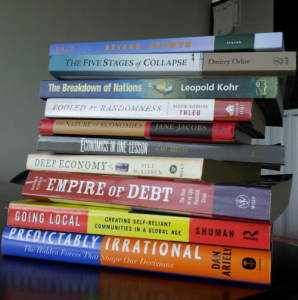 Bank loan or floating rates bonds are unique among bond types in that the rate is not fixed, but is free to move in relation to an underlying base rate such as the LIBOR (London Interbank Offered Rate).  As with any investment there are risks and bank loans are no exception.  With the prospect of rising interest rates looming over our economy, everything from bonds to houses will be impacted so I’m constantly looking for ways to benefit from that environment.

Virtus Investment Partners published a white paper in May of this year discussing floating rate funds and their characteristics.

Author and speaker James Howard Kunstler is perhaps the most outspoken critic of suburban sprawl and alternative energy as a replacement for cheap oil.  In a pair of TED talks in 2004 and 2010 he shares his perspective and explains how our we lost our “places.” (a word of caution: Kunstler uses colorful language at times)

For a deeper dive into how we got to where we are and some thoughts on where we might be going Kunstler also wrote a few books worth reading:

The Geography of Nowhere

Learn a Language, Translate the Web

Luis von Ahnm created Captcha to suppress spam on the internet and launched reCaptcha when he realized the potential of massive online collaboration to help digitize books.  Now he’s doing the same for language learning and translation with DuoLingo.

I’m relearning spanish right now, if you want to join me check out my profile here: Joe’s DuoLingo Profile

Schools in the Cloud

An insightful talk by Professor of educational technology at Newcastle University, Sugata Mitra on the legacy and shortcomings of an empire driven educational system and how his “hole in the wall” experiments compelled him to develop a new method of education.

It’s quite fashionable to say that the educational system is broken. It’s not broken. It’s wonderfully constructed. It’s just that we don’t need it anymore.